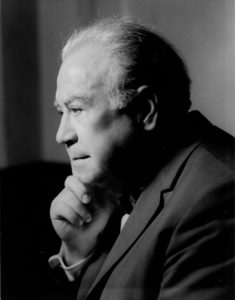 In 1924, the Western Unitarian described The Peoples Church of Chicago as “one of the most largely attended liberal churches in the world, its Sunday morning attendance being upwards of two thousand.” Dr. Preston Bradley (1888-1983) was 24 years old when Peoples Church called him to become its Pastor in 1912. He moved the church to progressively larger spaces as his oratorical skills attracted more and more people. In 1926, the congregation built the Preston Bradley Center: a huge building of six floors with two balconies and a wide stage, where the congregation continues to worship.  Bradley’s dream, as published in a 1942 press clipping, was that this congregation would have “a prophetic voice and civic conscience,” and it grew to have a membership of over 4,000 in the 1940’s, along with a distinguished social action program.  Bradley’s ministry included several church services each week, radio broadcasts reaching several million listeners, and an active community relief effort serving hundreds on the north side. 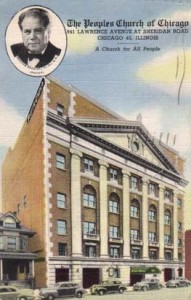 As urban flight and the general decline of mainstream denominations took place over the last four decades, membership in the congregation dwindled dramatically, and the congregation nearly closed its doors. A decision was made to jointly affiliate with the United Church of Christ while maintaining Unitarian Universalist Association membership. The congregation today has a membership of about thirty adults, maintaining an active social justice outreach ministry. 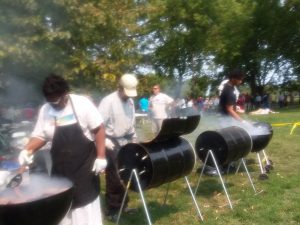 Peoples Church hosts an annual Labor Day Picnic for the homeless, with 400-500 people coming for pulled pork, burgers and hot dogs, as well as Thanksgiving and Christmas dinners.

We are a welcoming congregation

So come, let us worship together."